Once a month a performance on the flat roof of a theatre in the centre of the city.
The houses are build in circles around the stage. The farther the house the higher it is, the roofs create a grandstand. This concept will get the people on their roof with their rooffence! 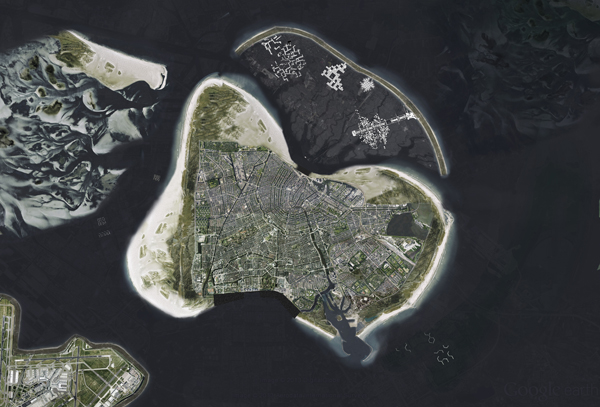 Amsterdam in 2413 is situated in a profoundly different world than what we know today. Though we were becoming more and more aware of the consequences of our excessive fossil fuel consumption, we have not been able to turn the tide and have exhausted all resources. The climate has become significantly hotter and global sea levels have risen two meters.

Following the trend of strong urbanization and centralization, a handful metropolises in Europe have risen to dominance. Amsterdam, in fact the whole Netherlands, has lost in this struggle and has receded to the periphery. Due to decreased investment and income, the country has not been able to sustain its national coastal defense financially. Around 2200 it became clear that we would only have the ability to protect smaller regions. Though initially the plan was to protect the entire Randstad, fragmented interests undermined the assurance to support a bigger ambition. As a consequence, only places of major importance in Holland have been able to preserve themselves: Amsterdam, the port of Rotterdam and Schiphol. The rest of the Netherlands that was below sea level? Flooded.

In this scenario Amsterdam is situated 8 meters below the sea level. With massive fortifications we are able to retain our island polder. A dunescape embraces Amsterdam and retains a fresh water lens under the city.

The old shore of the Netherlands protects the city of Amsterdam from the biggest waves, so it has in fact become quite attractive for tourists to visit, who flock from now leading countries in Asia and Latin America. The city offers the splendor of the 800 year old canal belt combined with the appeal of rough dunes and sandy beaches within reach. And it is here that we find the link with Las Vegas, which was our original assignment's starting point. Like Vegas, Amsterdam is now a tourist hub situated in the middle of economic powerhouses, in our case London and Paris, and like Vegas it is isolated by a desolate landscape, though in this case not sand, but water.

Basis for the water defense, the Zuid-as financial district is left outside: tall edifices rising out of the flat water. The area is defined by huge basalt block dykes of a strict geometric shape; a stark contrast with the soft dunes on the east and west of the city, referring to the pragmatic Dutch mentality. On the other side, where Central Station used to be the dunes converge into the new Dam of Amsterdam. Here the relation between the water and the city is most tangible, where you can almost see the water pouring into the city. But this is also the entrance to the city, where the ships with tourists and goods dock, where visitors see the city for the first time. 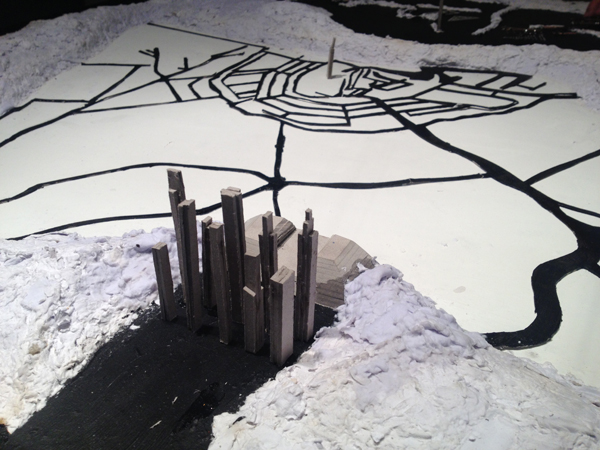